The ultimate goal is to ensure they are safe, happy and healthy

Meet Scott Maynard, Personal Advisor Central Throughcare at Stafford Borough Council. We caught up with him to find out more about his role and how he is supporting young unaccompanied Asylum Seekers. 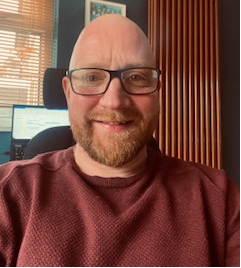 Scott supports young people who are leaving care, predominately with unaccompanied Asylum Seekers who have been in the UK for some time, helping them with everything from education to employment and housing. He says, “The ultimate goal is to ensure they are safe, happy and healthy.”

Scott himself joined The Princes Trust when he was younger. He says, “I knew I had potential but I just didn’t do particularly well at college. The programme really helped me understand me more and think about what I wanted to achieve.”

He then worked with Millennium Volunteers through The Princes Trust, finding voluntary work for 16-18 year olds. After a period of doing this he moved onto a Team Leader role running The Princes Trust programme that he once went on himself.

After eight years he moved to work directly for the council within the Children’s Disability Team, as Senior Family Support Worker, helping children up to the age of 18 engage in activities within the local community. He then moved to the Intensive Prevention Service, working with families who were at risk of breaking down

Scott said, “I provided hands on support to families and children. There was a huge emphasis on multi-agency working – the collaboration and engagement was essential in supporting children and their families. It was all about working together to empower families.”

Scott now works closely with Social Workers to support Asylum Seekers, working with them until they are 21 or if they are in college or education it carries on until they are 25. He says, “It differs massively to my previous roles. These young people have absolutely no family so it’s all around direct work with young people – to some extent playing this parental role and guiding them.”

He explains mental health hasn’t been so much of an issue in the past but thinks it could become more of an issue: “Because these young people have been through so much – many have had harrowing journeys to get to the UK and left behind them situations like war, abuse and major economic hardship – they are often quite resilient.

“However, lockdown has created a huge hole. We’ve worked hard to help them build a network and find their support group. Not being able to spend time with people has hit many of the young people I work with in a big way. They are just not used to this loneliness.”

Scott shares many examples. Some of the young people have become the victim of cuckooing, where criminals target the homes of people who are vulnerable and make them the centre of a local drug operation. He says, “Not having face-to-face time with our young people is a worry – there is only so much you can get via a video call, you just can’t see the full picture.”

He also shares a story about a lad who came here from Sudan and is currently doing a painting and decorating course. Scott said, “He was doing so well at college and is a natural at the practical – a star pupil. But when the course moved online he lost interest – it’s a practical course and not being able to do this was a challenge, he wanted to leave. We don’t want to undo all the good progress our young people have made and are doing our very best to support them.”

Scott is currently in his second year of a Social Work Apprenticeship, which is giving him the opportunity to gain a BA (Hons) in Social Work Practice and boost his knowledge whilst continuing to work.

He says, “It’s fantastic I have the opportunity to carry on working for the council whilst studying using my role to develop the knowledge of the theory and law and how it feeds into practice.”